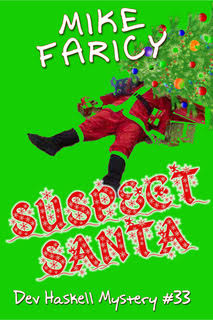 Just in time for Christmas, award-wining St. Paul author Mike Faricy has come out with yet another ‘work of genius’. His thirty-third book in the popular Dev Haskell series, Suspect Santa. A humorous crime fiction tale set in St. Paul Suspect Santa has private investigator Dev Haskell, contacted by local millionaire Arthur (Arty Farty) Grumley. They were high school classmates, and Haskell never liked Grumley. Nothing has really changed, but since ‘Arty Farty’ was willing to pay, Haskell took on the investigation, and it’s about to lead him into some rather dangerous areas.

Meanwhile, Haskell is dating two women. What are the odds they know one another? Understandably, the relationships get rather complicated. One of the women Haskell is dating takes on the role of Santa’s Elf at a commercial site where children come to visit Santa, but there’s just one problem, this particular Santa isn’t a very nice person. A man named Arthur Soto is Santa, and by all accounts, he should have been fired years ago. He yells at children, tells them to hurry up, threatens not to come to their house, and he drinks on the job. Things go from bad to worse, and Dev Haskell begins his investigation into Soto’s background.

The investigation leads to more than Dev Haskell anticipated, but true to form, he sticks with it, and in the end, well, I guess you’ll have to read this enjoyable book to learn what happens and the amazing gift he gives to a family.

Faricy’s Dev Haskell series has a number of familiar local landmarks. Everything from the Spot Bar to Shamrock’s restaurant and the St. Paul Courthouse. Faricy has currently written ninety-three books. Just released on November fifteenth, at no surprise, Suspect Santa is listed as being in the top one hundred of Amazon’s Private Investigator series and has a rating of 4.5 stars. Along with the Dev Haskell series, Faricy writes the Jack Dillon Dublin Tales series, the Corridor Man series, and the Hot Shot series.

I hope you enjoy the read and Merry Christmas from all of us at The Irish Gazette.