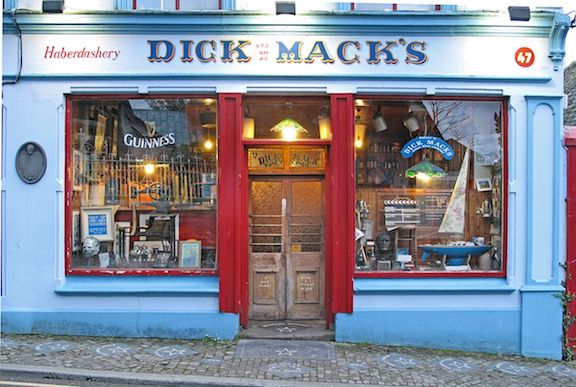 Dick Mack’s Pub is a must see place on every tourists itinerary when they are in Dingle town on the Dingle peninsula in southwest Co. Kerry (Dingle is often referred to as the last parish before Boston).

Dick Mack’s is situated across the street from the Catholic Church on Green Street in town and is referred to as the last pew of the church. Many is the time that the men folk would be having a pint and a lookout at the church would call out to them to get in the church so that they would make it before the offertory and get credit for having attended mass for that Sunday.

In the early part of the 20th century Dick Mack Sr. (Richard “Dick” MacDonnell) was the train station agent in Dingle and he noticed that the passengers wanted to quench their thirst after a long ride on the train to reach Dingle. Hence Dick Mack added a pub to his already thriving leather business; making belts’ shoes’ and sundry other things for the farmers and seaman of the area.

Dick Mack Jr. took over the business sometime in the late 1920’s from his father and also ran the business with a full leather shop on the left side when you walked in the door and the bar and snugs on the right side of the room.

I made Dick’s acquaintance in 1989 on a trip to Dingle. He was a great story teller, surrounded by a cast of characters that could best him on a good day so it was a lively time and always a first and last stop of the day for my friends and I.

Dick told the story of the time during the Second World War when he was late going home in the middle of the night and he noticed a dark figure moving from doorway to doorway through the town. Dick positioned himself in a doorway along the mysterious figures path and grabbed him in a wresters hold and demanded to know what he was about. The man told Dick he was from a German submarine that had run aground in the Dingle harbor and that he was sent ashore to seek help for the craft. Dick rounded up several of his friends and eventually with boats and tugs pulled the sub free and sent it on it’s way. Ireland was a neutral country during the war and he said the secret was never told to the authorities until several years later.

On a trip to Ireland in 1991 I got into Dingle only to hear that my friend wasn’t feeling well. I managed an audience with him in his living quarters which were in adjoining rooms attached to the bar. We took the time to reminiscence for a while until he got tired and I left him with promises to talk another day. A day later Dick died and his stories died with him. It was a great funeral and wake that was had and a picture of him hangs in the pub today.

Dick Macks’s was not a tourist bar however it is probably considered that today. In Ireland it was considered a local for a good many people in the area. I met many people in the local artist community that frequented the pub. The most prominent of that group in those days was a man called Jay Killian who was originally from Boston and settled in Dingle where his painting talent made him famous. He would always wear a sea captain’s admiral type hat with the shiny black brim and the high from on the top. There is a wonderful painting of him hanging in the pub to this day that I believe is a self-portrait. He has sadly, also passed on several years ago and his paintings have risen in value accordingly.

Another talented artist that has gained prominence in the area and is also a regular at Dick Mack’s is Geraldine Keogh. She has a gallery around the corner from Dick Mack’s, the last time I was there, where she sells her paintings along with the other artists that have gathered in Dingle.

On the sidewalk now in front of the pub there are Hollywood style pavement star slabs with the names of famous people who have visited the pub: Julia Roberts, Sean Connery, Tim Dalton and Paul Simon, just to name a few.

Jim Brooks is the publisher of the Irish Gazette.