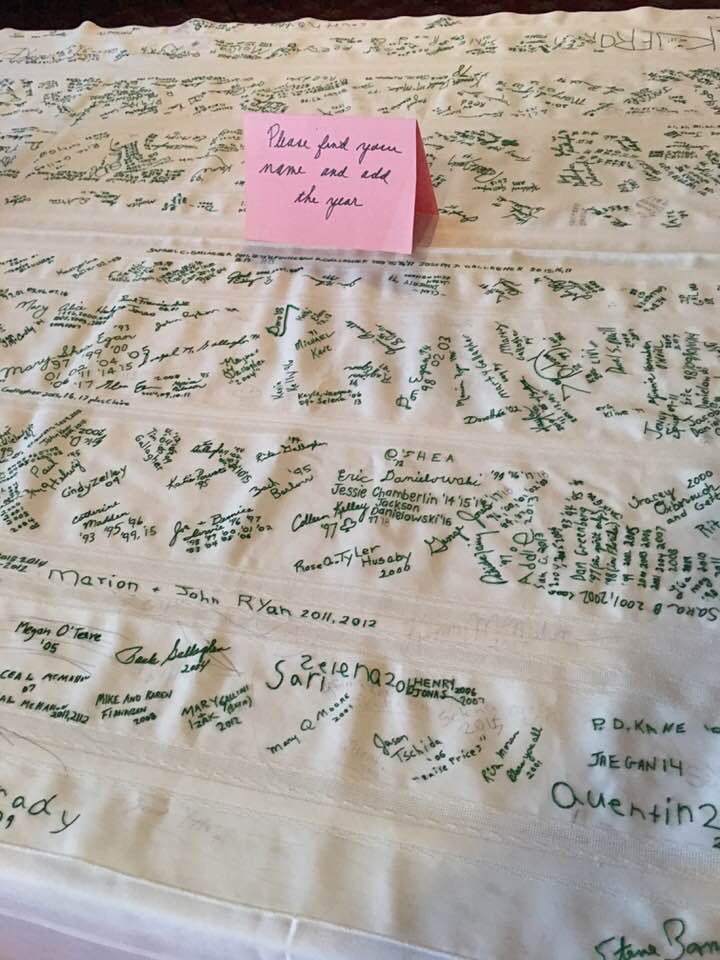 You’ll see Gallaghers, Kanes, Egans, Treacys, McGraths, McCarthys and O’Phelans, Sheas, Harrises, Ryans, Galligans, Faricys, Murphys and McMahons. And because the Irish are a welcoming people, you’ll find Greenbergs, Muelkens and Russomannos too. On every St. Patrick’s Day in St. Paul, Mary Gallagher Nilsson makes sure you commit to the cloth–the tablecloth that is.

For nearly 50 years, since shortly after the St. Paul St. Patrick’s Day parade began on March 17, 1967, Mary and her siblings John, Kay, Liz and Joe, decided this was a day for tradition, for church and green doughnuts, definitely a parade and maybe cabbage if you’re faithful. Our matriarchs and patriarchs have kept kids out of school and then when we children grew, we kept ourselves out of work. This was a day for family.

I know the Irish are not alone in feeling grateful for the stories passed to each generation. In our family, we learned our Gallagher ancestors emigrated to America in 1853 through New Orleans. By 1855, their farm was homesteaded near Savage. As my Aunt Kay noted, “They etched out a successful farming career in times that saw droughts, diseases and want. They certainly weren’t alone in their hard work, poor conditions and perhaps loneliness, but they were a persistent lot who succeeded even when the winter cold, unpredictable summer weather and family health threatened their goals.”

Like my own family, many Irish settled south of the Minnesota River in Lakeville, Burnsville, Savage, Rosemount, St. Patrick, Kilkenny and Credit River. Now, each year, they emigrate to downtown St. Paul to celebrate culture and joy. They are joined by attendees who have come to our reunion from Georgia, DC, NYC, Wisconsin and Kansas.

Any parade goer knows that St. Patrick’s Day in Minnesota can bring a downpour of rain, a snowstorm, or in 2012, the year I had the privilege of being the Distinguished Irish Woman, 80 degrees! Shorts and green t-shirts, an umbrella, a winter coat? We’ll know that morning!  The weather will not break our persistence to walk. And that persistence was never more apparent than with my Uncle Joe Gallagher, who carried the Irish tradition of fortitude and pride following a terrible accident that resulted in the amputation of his leg. His response? A prosthesis covered in shamrocks. That’s the Irish attitude. The parade walk ends with a multi-family photo in Rice Park with the Landmark Centre as the backdrop, each family’s name on a banner prominently sharing space in front of the hungry crowd.

Then we gather for the corned beef and conversation. In addition to the legacy of her 5 children and 6 grandchildren, Mary Gallagher Nilsson created another legacy when she began gathering all of her extended family and friends together on one piece of fabric at the family meal, including the signatures of all who attended. When she began the tablecloth tradition decades ago, she asked that children and adults sign their name and date in pencil. She faithfully spent the following year using green embroidery floss to secure the misspelled names in big block letters of children, the boyfriends or girlfriends who are now long gone or an acknowledgement of those who have gone to the green pastures of Heaven. Mary remarked that, “It always saddens me when I add RIP after a signature” as time passes.

One year, she counted 162 names to embroider, and her poor fingers and sharp brain knew it was time to ask people to just add the new year next to their name! If you look closely, you can see the patience that only a mother could have in tying the ends of separated letters by a child or a torturous smart aleck who has long forgotten cursive writing.

Mary shares that, “each year I pray for the individual as I embroider their name”. No guest book has ever been prayed over more.