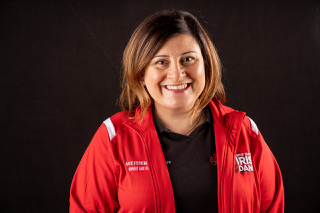 Katie Stephens Spangler, originally from Milwaukee, Wisconsin, began her involvement in the Irish community as a dancer with the Trinity Academy of Irish Dance. She performed and competed all over the world for 11 years with Trinity along with assistant teaching. She comes from a family that have been long-time volunteers with the Milwaukee Irish Fest.

Stephens Spangler moved to St. Paul in 1998 and taught Irish dance for four years with the St. Paul Irish Dancers while attending the University of St. Thomas.  During that time, she performed at events, concerts and pubs throughout the Twin Cities.  After graduating from UST in May, 2002 with a BA she then opened Rince na Chroi in February, 2003. Under her direction for over nearly two decades, Rince na Chroi has grown into a thriving Irish dance school.

The school currently enrolls more than 200 dancers from age three through adults.  They perform throughout the Twin Cities and the Midwest Sharing their love of dance wherever they go.  The group averages 100+ public appearances each year and is committed to performance and teamwork. Rince na Chroi will be performing at Irish Day Of Dance, along with several Irish dance groups on March 13 at Landmark Center.

She lives in St. Paul with her husband Jason, their two children, Alice and Robbie, and their dog, Sweeney.