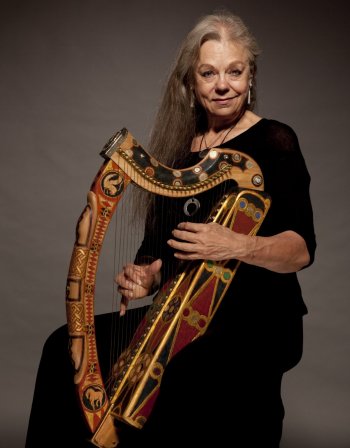 Ann Heyman was Honored for A Lifetime Achievement Award.

Both the Somerset Folk Harp festival and the Historical Harp Society of Ireland were recognizing Ann Heymnn with their Lifetime Achievement Awards this July. The decisions that each group reached independently. Somerset’s award honors Ann’s pioneering work with wire-strung harps and her importance to the harp community. She was presented during the conference where she received her award before her performance on July 22nd. The Historical Harp society of Ireland honors Ann for her work with their organization and with the greater early-Irish-harp world internationally. The Society bestowed the award at their Festival on July 26th.

Ann has spent nearly 50 years researching, experimenting and developing the techniques, and sharing her expertise tying ancient lore to her brilliant performances on the wire-strung harp. When people talk about pioneers in the harp world, there is no one who fits that description better than Ann Heymann. When you listen to her you are transported back to the Great Hall. It has been said that without Anns significant contributions to the playing of the early Irish harp the Historical Harp Society of Ireland would probably not exist. That is an indication of how great her reach has been, and the importance of her contribution to the field over decades.