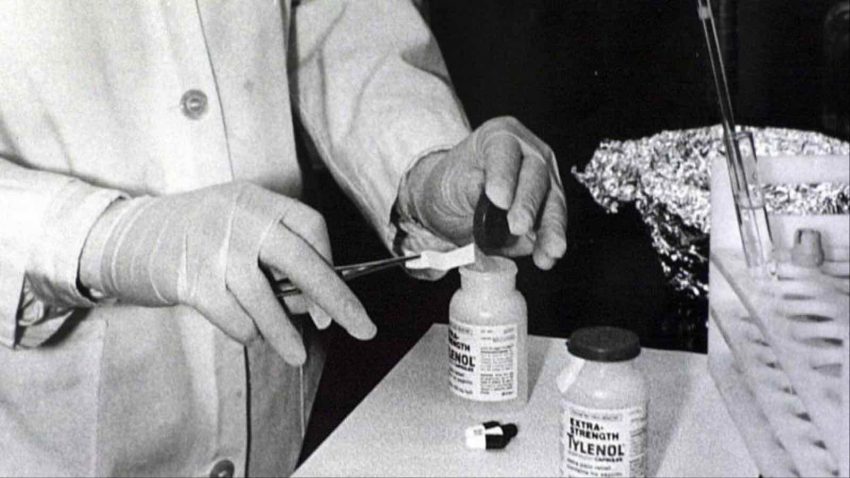 In the fall of 1982 the Tylenol poisoning murders terrorized the Chicagoland area. One result was the changing of packaging in America and around the world. “Irish” Charlie Ford was the lead homicide detective for the City of Chicago in that case. In retelling the circumstances surrounding the events Charlie’s version is different from the official one.

Paula Prince, age 35, flight attendant, was the first person poisoned but the last body found. She bought a bottle of cyanide laced Tylenol at a Walgreens on North Wells Street, went to her nearby apartment and took two of the capsules. She was dead before she hit the floor. She was found half in and half out of the bathroom, one of her shoes off, the bottle on the vanity and the receipt nearby. Rigor mortis stiffens the body and after a period of days releases its grip. This is how she was found. Charlie was at the crime scene when the Cook County medical examiner, Robert Stein, unexpectedly showed up at the scene, when normally only an investigator from his office would. He was seeking media attention. He picked up the bottle of poisoned Tylenol, after Charlie had advised him the Crime unit hadn’t arrived to process it for prints. Stein poured several capsules into his hand, juggled them around and put them up to his nose. He sniffed them and said, “They smell like burnt almonds”. Then he tried to stick them under Charlie’s nose to smell. That’s when Charlie pushed him away and gave him a few choice expletives and told him what a moron he was! The grandstanding and interference didn’t end there. It was only beginning.

In Illinois the State Attorney General does not handle normal criminal investigations. In murders almost never. Tyrone C. Fahner, appointed to the post in 1980 and running far behind in the 1982 election, took it upon himself to form the “Tylenol Task Force ” with him in charge. Fahner used this position to give almost nightly news conferences in order to pump up his exposure, for campaign purposes. Too little too late evidently. Tylenol Ty as he became known, lost in a landslide in November.

Asking the public for tips the police got one. A bar owner called Charlie and said there had been a guy in his bar a few weeks earlier waving around a small plastic bag with white powder in it, bragging that he could kill anyone and no one could find out how or who. Charlie went over to the bar, gave the owner his card and said if this guy comes in again give us a call. Several weeks later they got the call. The guy was in the bar sitting on a barstool. Charlie and his partner rushed over, yanked the guy off his barstool, dragged him outside and started to question him. The guy, Roger Arnold, was clever but not too smart. Reading Arnold, Charlie says they schmoozed him. They asked him what kind of a criminal mastermind could have devised such a scheme. They gained his trust. Arnold consented to a search of his house. In the basement the police found precursor chemicals for potassium cyanide, along with several books on how to make poisons, plus unregistered firearms. Case closed, right? Wrong.

Tylenol Ty and several high ranking police officers took over interrogations of Arnold, not allowing Charlie and the pros to do a follow up. Threats of prosecution and continual surveillance failed to make Arnold confess. They thought Charlie’s Consent to Search wouldn’t stand up to a motion to suppress, so with an Assistant State’s Attorney Charlie had to get another search warrant and re-search the house. Little new evidence was found. What happened next was tragic-comic.

Out on the street several months later, the gun charge resolved and the rest in limbo, Roger Arnold saw a man walking down a Chicago street who resembled the bartender, apparently because both men had a beard. Thinking it was the bartender who had called the police on him, Arnold pulled out a gun and shot the stranger dead, right on the street, in broad daylight. A case of mistaken identity.

For the crime of second degree murder Roger Arnold was sentenced to 30 years in prison. He served 15. Like an Irish goodbye shortly after being released from prison Arnold died of natural causes in 2008, saving the state the cost of a funeral. To this day the Tylenol Poisoning Case remains officially unsolved and open.

What can we learn from this? We can learn to trust the rank and file professionals to do their job. We can learn to back them up. And then the cameras and headlines and all the rest will take care of themselves. Because the truth will, usually, will out.

Postscript: At Arnold’s trial for the gun charges, the Consent to Search was upheld; the subsequent search was tossed by the judge.

As another Chicagoan, Paul Harvey, used to say, now you know the rest of the story.