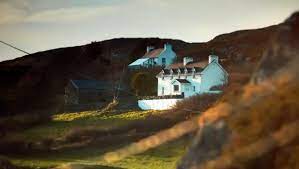 According to recent statistics, Co.Cork, Ireland has the lowest crime rate but the highest homicide rate of any other County in Ireland. There were 42 murders in the last five years despite any major gang activity in the city center. This would come as no surprise to the family of Sophie Tuscan du Plantier. Du Plantier’s brutal murder in rural West Cork late in 1996 still haunts the Irish police system twenty five years on as one of its’ most famously unresolved cases.

The three-part Netfilx series, A Murder in West Cork, s directed by John Dower and produced by Suzanne Lavery. The series presents a powerful case against both the ineptness of the Irish police investigation and a Manchester England journalist who had moved to the area and appeared on the murder scene early on behaving strangely.  The series also explores the justice systems in France and Ireland and the tensions that have developed due to this case. The documentary casts a wide net with numerous interviews of local members of the town of Schull.

The evening before her death she visited the ruins of Dun Lough at Three Castls Head and saw an apparition or what local legend calls the, “White Lady.” The local myth is that people who see the figure will die in the following hours. Unfortunately that is what happened to du Plantier.

The alleged ghost sighting adds some extra paranormal mystery to the documentary, however it is only briefly mentioned in the first segment. There was also a mention in the documentary that du Plantier had a dark side that gave her personality depth.

The Netflix series includes statements by local villagers that the absence of the deceased’s husband to identify the body, confer with Garda and handle details associated with his wife’s murder appeared strange to them.

The series begins with the information that prior to the murder of du Plantier there had not been a murder for 100 years in the area. The concern of the the residents is palpable as they explain why they began locking their doors and tensions increase as the murder investigation drags on.

The series is meticulously researched and provides a glimpse into the Ireland of 25 years ago when the crime occurred. It also provides gorgeous shots of the beauty of the West Cork area and testimony from the international artists and others who call this remote area home.

More information about the documentary is available at Netflix.