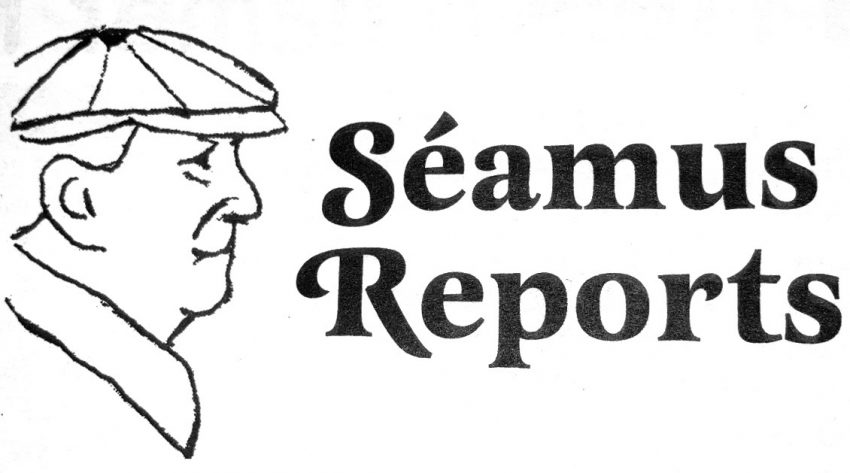 A great St. Patrick’s tradition that has been held next to the Landmark Center in downtown St. Paul since 2010 and hosted by Larson King LLP, the largest law firm headquartered in the saintly city, has been put on hold for two years.  The invitation-only tent party will resume next year according to Patrick O’Neill, Jr., (Mr. Pat, 2006) who states “That his shoe is polished and ready to go in 2022.” More than 800 people attended the festivities in 2019 and enjoyed the lovely food and drink catered by the neighboring St. Paul Hotel. The event also featured local musician Tom Dahill, local Irish dancers and the famous Brian Boru pipe band.

The oldest bar in the world is in Ireland! Sean’s Bar, Athlone, Co. Westmeath, has been researched thoroughly by the Guinness Book of Records and proudly holds the record for “The Oldest Pub in Ireland” with an official dating of 900 AD. Research is ongoing regarding the title of “The Oldest Pub in the World” but so far, nothing older has been found.

Surprisingly Ireland, the home of Guinness, does not sell the most Guinness in the world! Britain is first, Nigeria is second, and Ireland is third! An estimated 40 percent of all Guinness beer is sold in Africa.

World landmarks will turn green again this St. Patrick’s Day. From Brussels to Buenos Aires and from Sydney to San Francisco, hundreds of iconic landmarks and buildings around the world are set to light up green to mark St. Patrick’s Day with the 12th year of Global Greening.  Among the new sites are, a postbox at the summit of Øretoppen Mountain above the Arctic Circle in Norway, the village of Portmeirion in North Wales, The Palm Fountain in Dubai, Bled Castle in Slovenia and the Sekenani Gate at the Maasai Mara National Reserve in Kenya, all joining some ‘old favorites’ in turning green this year. A great reminder of the Irish diaspora that celebrates St. Patrick’s  Day worldwide.

You may have heard of the Connemara Patch in St. Paul or read the article in this issue of THE IRISH GAZETTE. You can now take a tour lead by Teresa McCormick, informed guide for all things Connemara Patch and learn more about this important historical Irish neighborhood. The tour will be held on Saturday, July 17, 2021 from 1 p.m. to 3:30 pm. and to register for the tour or get more information, email Teresa at mcco81@gmail.com

The annual St. Patrick’s Day Mass will be held at 9:30 a.m. on Wednesday, March 17, 2021 at the Cathedral of St. Paul with Celebrant Archbishop Bernard Hebda. Due to the pandemic, this year the mass will be scaled back with face coverings and social distancing required and the Cathedral will be at 50 percent capacity. The mass is sponsored by the Ancient Order of Hibernians, Archbishop John Ireland Division 4-Ramsey County.

The Quad Cities have postponed their St. Patrick’s Day Grand Parade XXXVII until later in the year in hopes that by then the pandemic will be only a bitter memory. Milwaukee too, has postponed their parade to later in 2021, while others, like Sioux Falls, South Dakota and Cogswell, North Dakota  have cancelled their parades entirely. Hopefully, with the distribution of the vaccines accelerating, the Irish Fests and Irish Fairs will be held in summer, 2021.

Due to current event capacity restrictions in place to prevent the spread of COVID-19, LuckyPalooza on West 7th in St. Paul will not be held this year. But the organizers are hopeful that it will be back next year.