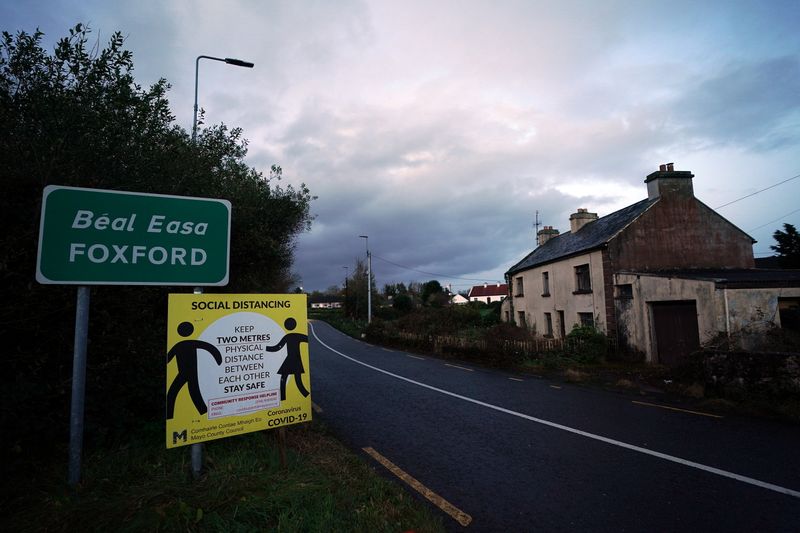 By Sean Farrell (Editors Note: This was written at end of November for a December issue of The Irish Gazette, which never reached the press because of the virus. Image courtesy of KFGO.com website.)

I write as someone from Ireland with deep affection and admiration for the USA and its people. I have lived and worked enjoyably in the USA over the years. My daughter, son-in-law and grandchildren are US citizens (he with a pedigree going back to the early settlers) and I have many American friends. I am immensely proud of the great Irish American Community and the part the Irish have played in US history. My admiration is not uncritical, particularly regarding some of the obvious flaws and injustices in US society as well as some aspects of US foreign policy.  However, I am also acutely conscious of what we owe to the USA in terms of defence of freedom and human rights and to the gradual improvement in the condition of Mankind. The “American Century” was not perfect but the alternatives which were faced down were worse. The near future, particularly regarding the World’s climate and population looks bleak and, with xenophobia and nationalism rampant, probably never has there been a greater need for responsible and inspiring leadership from the USA. I don’t know how well Joe Biden or his successors will meet the challenge. But nothing could be as bad as Trump. With his defeat the USA has won back its dignity.

Anyone with access to Amazon and a taste for escapism could do worse than take a look at the “Man in the High Castle” TV series. Its alternative history hokum set in the 1960s in which the USA had “lost” World War Two and is now occupied and partitioned between the Nazis and the Japanese. Nonsense? Of course. The plot gifts the Nazis the Atomic Bomb (shown detonating over Washington D.C.) while the Red Army and Churchill never get a mention.

In real history the seventy ninth anniversary of Pearl Harbour takes place this month. The months that followed were the grimmest of the war. The Japanese swiftly overran most of Asia, inflicting humiliating defeats on the USA and Britain. In Europe, despite being repulsed before Moscow, the Nazis consolidated their hold, launched major new offensives on the Eastern Front and in North Africa and, only weeks after Pearl Harbour, at Wannsee devised the Final Solution to murder all Europe’s Jews .

The USA, Europe, and the World, were fortunate that Roosevelt was the US President at the time. He gave leadership, galvanised and mobilised the US nation against the existential threat that the Axis powers represented in a war that saw 400,000 plus Americans die. What if someone else had been President, someone who had listened to the loud isolationist voices urging against US involvement in the War, or had listened to Ambassador Joe Kennedy in London, who was sure Britain would be defeated, or had listened to those cheering on the Nazi campaign against the Communist Soviet Union?  Or had even played footsie with the Dictators? What if the President in 1941 had been his inept predecessor Hoover, or somebody just as bad, incapable of giving national leadership, strengthening morale and inspiring the country to organise and win?

I was reflecting on this as the 2020 Presidential Results saga unfolded. Trump is now gone – for the moment at least – but the movement that gave him, warts and all, over seventy million votes has not gone away and is likely to be a factor in future US politics. As an aside I note that the division in US society – more or less fifty-fifty – is eerily similar to the divide in Britain over Brexit, with the difference that in Brexit the Bad Guys are still triumphant! The lesson there, btw, is that a fractured society does not mend easily; and President –Elect Biden takes office with two strikes against him – the Virus running rampant and the Economy in tatters.

Moreover, it turns out that “the Economy, stupid” very nearly won Trump a second term. Exit polls identified the Economy rather than the Corona Virus as the dominant issue for voters. Here Trump had been on a winner, inheriting an economy in good condition, which he pump- primed energetically through tax cuts breaks for the wealthy and the removal of restraints, including environmental restraints, on US business. With most of the economic indicators positive, on paper at least, as 2020 dawned Trump stood a reasonable chance of being re-elected on economic grounds alone, despite many having to hold their noses to vote for him.

This also despite Trump’s foreign “policy.” To the outside observer it has seemed that since 2017 US foreign policy has careened without coherence, subject to Trump’s whims.  His apologists will argue that it was about time other NATO countries stumped up more of the Alliance’s costs, and that it was time also  a (metaphorical) warning shot was fired across China’s economic bows  before the entire North American and European manufacturing base was damaged beyond repair by the tightly controlled and regimented  Chinese behemoth. “Bringing the troops home” was also popular with the isolationist lobby. Yet against this who cannot have cringed at Trump’s antics over North Korea, his infatuated pursuit of friendships with the leading gangster autocrats of the world like Putin, Bolsonaro, Erdogan and others (Xi Jinping would be there also were it not for the Corona Virus) and his insulting treatment of his North American neighbours and his traditional Western European (democratic) allies, Boris Johnson excepted?

There is a defining moment or circumstance for every US President, by which ultimately they will be judged. FDR had several. For Truman it was the Bomb and the Berlin Airlift, for JFK it was the Cuba Crisis, for LBJ it was Vietnam, for Nixon Watergate, for Jimmy Carter the Hostages, for Reagan victory in the Cold war, for Bush 41 the Gulf War, for Clinton Bosnia, for Bush 43 Nine Eleven and Iraq , for Obama, Bin Laden.

Last year I would have identified Trump’s defining issue as the brazen, indefensible, irrational and delusional decision to pull the USA out of the 2015 Paris Agreement on climate change. The Paris Agreement is toothless, inadequate and already wrong footed by five years of continued global growth in emissions and population, but at least it has provided a framework and targets for action and a wakeup call that the world was in peril. The scientific evidence is overwhelming and there can be few outside those actually paid by the fossil fuel lobby who doubt the reality. Yet Trump, with a grisly Luddite consistency remains a denier and has abdicated on behalf of his country the leading position the USA should be taking. This while the growing numbers and seriousness of forest fires and the increased annual battering from hurricanes taking place before his eyes bear testimony to what is happening .

But then, in 2020 came the Corona Virus. Yes it came from China, yes it is global and has hit many countries hard. Yes everywhere people are dying. Deaths are currently over 1.3 million – that we know of – and identified cases well over 50 million and climbing. Some countries have worse mortality rates than the USA ( which is currently at 756 per million), Belgium and Spain among them, while a clutch of seven Latin American countries , together with Britain, have roughly similar rates. All true. Yet Canada’s rate is 287, Germany’s 150, the Nordics, even Sweden, very significantly lower; Ireland’s rate is 398 – roughly half that of Trump’s America. The bald unadulterated truth is that the USA, the world’s wealthiest, most advanced and developed  country, a leader in medicine and medical research, with 4.25% of the world’s population, has 20% of the dead (250,000) and  recorded cases,  with infections spreading exponentially.

The Virus has been Trump’s Pearl Harbour – and his Nemesis. From Woodward we know he knew early on how serious it was – indeed the swift and decisive actions of his erstwhile friend Xi offered proof if it were needed. He downplayed it; he denied it, fully in the knowledge of the mega consequences. He ignored and belittled a constant stream of medical advice. He provided no leadership. He ducked reality; he ducked responsibility. He is bequeathing a mess from which it will be difficult for the USA to emerge with casualty figures possibly more than the US suffered in World War Two. America deserves better.

For Joe Biden the task of restoring the USA, internally and externally, to its rightful place in the world will not be easy.