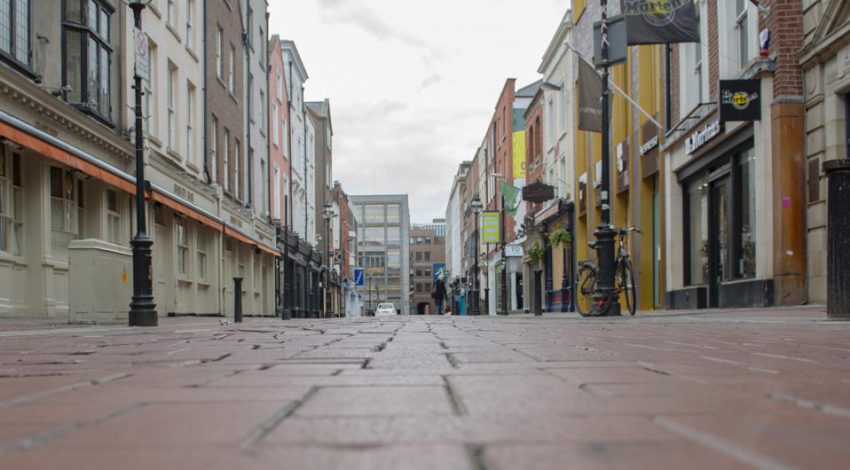 March in Dublin is a time of optimism. After the long, dark Irish winter we come into a time of longer days, colorful, less rain and of course the March 17th celebration of our national saint….. Patrick himself.

This all changed in 2020 with the arrival of Covid in Ireland.

Dublin suddenly became very different from the city that usually looks forward to the arrival of March.

Before the lockdown in mid-March tourists seemed to vanish gradually from the usually colorful and bustling Dublin streets and tourist attractions and the city tour buses were running empty. The city’s museum’s and cathedrals suddenly became quiet and that Irish bellwether, the pub suddenly became populated by mainly Irish people even before the pubs and most other places were ordered closed

Your writer is one of the faces you see when you arrive in Ireland as either a concierge or a tour guide depending on the time of year. Transitioning from one position to another is usually relatively simple.

The unwelcome arrival of covid changed all that. Just before my guiding season was to start the hotel where I was employed along with all other hotels in Ireland were ordered shut. All my upcoming tours around Ireland were cancelled in a domino like set of events.

Lockdown had arrived with an unkind vengeance. Suddenly it seemed like the soul of this city had stopped. We were not allowed to travel more than 2 km from home and the Irish police, the Gardai were everywhere. Normally they’re nowhere to be seen except on road inspections checking people’s car tax. In addition, people were afraid to be around each other, which is not normal for us, with rish being gregarious and social by nature.

Not everything during the covid lockdown was dark or negative though. People also volunteered like never before. We became more aware of vulnerable neighbors, family and friends and were generally following the rules around social distancing and mask wearing. Except teenagers of course who are immune or at least they think they are in Ireland.

Now it’s August and many parts of Ireland the lockdown have been lifted but it’s still surreal. Like being in a movie that’s actual reality. Pubs were still closed unless you serve food. Does that makes sense? Many publicans are up in arms and they’re fighting for survival. Not just publicans but other small businesses also. Walking thru central Dublin the other day I reckon that one in every four small businesses seem to be closed for good. The streets are very quiet. All visitors must self-isolate for 14 days on their arrival to the island. Americans and Germans are being turned away from restaurants for not self-isolating, while Britons straight off the ferries are allowed entry to the same restaurants. There are lots of conflicts as we are making up rules as we go along. Irish people tend to be stoic and generally obey the rules. The rules now are different and I wonder how long people will continue to be accepting of this new reality that had turned Dublin and perhaps most of the world on its head?

Recently three of the counties around Dublin have been forced back into lockdown as Covid cases splurge in those three areas. Most of us in Dublin and the rest of Ireland are expecting to be put back into lockdown again soon as the virus seems to be fighting back. People are starting to ask how much longer our damaged economy can continue like this?

The government here acted fast and was more successful in curbing the spread of Covid than our neighbors in the UK whose farcical carrying on has produced the most Covid deaths in Europe. The government also stepped in and provided an income for those of us who lost all our income so we’re luckier than most in this world. Somehow it’s still like being in a strange movie where not quite everything is normal. Sure the Irish have been thru far worse; we’re resilient and will survive this unwelcome tourist. Oh…. And the pubs are still closed.

Marc Power is a lifelong resident of Dublin and after a short stint as a teacher has been in the hospitality industry for several years.