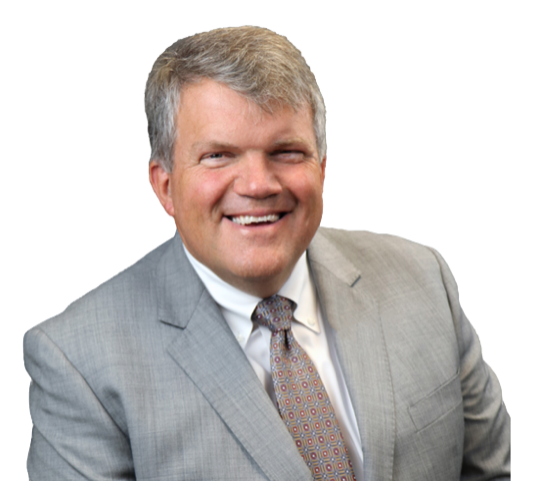 Special to The Irish Gazette

Bill Baker will celebrate his 60th birthday on March 14 with a special flair: He’ll be the Grand Marshal of the 41st annual St. Patrick’s Day Parade. The Parade is set for Saturday, March 14 in Sioux Falls.

Baker retired earlier this year from The First National Bank in Sioux Falls following 36 years of service, including 19 years as CEO and president or chairman. He was the fourth Baker family member to lead the 135-year-old bank since 1910. Although he’s retired, Baker will remain as the board chair.
His family roots are predominately English, but Baker says a genealogy DNA test shows he has 13% Irish blood. It’s his wife, though, the former Peg McGuire, “who brings legitimacy to this outfit!” Baker says.

Known as the “people’s parade” since it was started by the late Sylvia Henkin, the St. Patrick’s Day Parade typically draws thousands of people from around the region to watch an eclectic ensemble that includes individuals, groups, business and – especially – Irish families.

The Bakers have three children, Maggie Groteluschen, Lauren Baker and Billy Baker. Peg, an avid knitter, is already at work on Erin (or Irish) sweaters and vests for children and grandchildren. Baker says the whole family plans to march in the parade.

“Our whole family is excited about the opportunity to play a big role in the St. Patrick’s parade this year,” Baker said. “The bank has always been a part of the activities.”

While the name of the Baker family and The First National Bank in Sioux Falls long have been a part of the Sioux Falls community, Baker says the early days, from the time great-grandfather W. L. Baker became president, in 1910 through the Depression, often were a struggle. That changed after World War II when Sioux Falls – and the bank – soared. Baker’s grandfather, W.W. Baker, and then his father, Bill Baker, were at the helm.

The first non-family member in more than century, Chris Ekstrum, is now president and CEO, but there are still two family members in active management, daughter Maggie and cousin Bob Baker. In Baker’s view, the priority on family, backed up by other values like relationships and stewardship are the reason First National is the oldest bank founded in Sioux Falls with 270 employees.

Baker grew up in Sioux Falls, working at jobs ranging from “pig alley” at the Sioux Falls Stockyards, to bartender at a resort, to helping at the bank. He’s been on the board of numerous non-profits in Sioux Falls, but the experience he remembers most vividly was when he was head of the 2002 Sioux Empire United Way campaign and convinced country-star Dolly Parton to put on a benefit concert to kick off the drive and its Imagination Library program.

“Dolly had started her Imagination Library which gives young kids a book every month,” Baker said. “I was really surprised when she accepted my invitation to come here and offer a full concert to support our campaign and the reading program. It was amazing to meet and work with Dolly and in the end, she covered all of the concert costs.”

Advance registration is required in order to participate in the parade and there continues to be no entry fee. Registration must be completed online at siouxfallschamber.com/StPatricksDay.cfm by March 9. The website also includes detailed information on the parade including rules for participation. The parade usually has about 100 entries and again this year, will be led by the Khartum Temple Pipes and Drums, a Shrine unit from Winnipeg, Manitoba.

Each parade entry must have some kind of Irish theme and each participant over 16 must purchase and wear an official St. Patrick’s Day Parade button. The $3 button helps cover the costs of the parade and supports local non-profit organizations. Buttons are available in advance at the Chamber of Commerce office, at numerous businesses throughout the community and from volunteers. They can also be purchased on March 14 at the start of the parade. Since 1982, nearly $141,000 has been raised for Special Olympics of South Dakota, the primary benefactor of the button sales.

Other activities:
• The 2020 Miss Shamrock is selected by the Sioux Falls Irish Club and will appear at the painting of the shamrock and in the parade.
• The “Vanguard Squadron,” an ethanol-powered airplane stunt team, again will perform at the start of the parade, weather permitting.
• The falls of the Big Sioux River will be lighted green both the evening of the parade and on St. Patrick’s Day.

Sponsorships from Sanford Health, Avera Health, Holiday Inn City Centre, Xcel Energy and Lloyd Companies help underwrite the costs of bringing the Khartum Temple Pipes and Drums from Winnipeg. They have performed in the parade almost since the start and make guest appearances in local schools, nursing homes and hospitals in the days leading up to the parade.