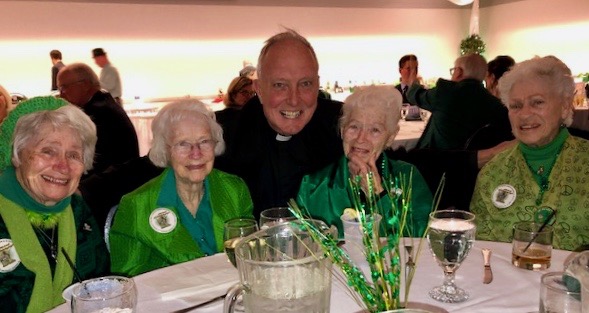 The 2020 Distinguished Irish Woman is actually four remarkable local women, Jane, Brigid, Kate and Rita-the McDonald sisters who are mainstays in local activist circles. They have been working on behalf of peace and social justice for the past 50 years. For decades, they helped keep the weekly Wednesday night protests on the Lake Street Bridge going. Remarkably, despite being in their 80s and 90s, all four were in attendance opening night at the History Theatre play documenting their life: Sisters of Peace.

Among 11 siblings born on a Minnesota farm in the 1920s and 1930s, these four chose to become nuns, entering the convent under the strict rules in place before the reforms of Vatican II in the 1960s. Thereafter, they left their habits behind, and–each in her own way–evolved into non-violent activists practicing civil disobedience. They anchored regular protests here in the Twin Cities against bomb manufacturing and for peace, racking up multiple arrests and building relationship with local police.

They are excited about being part of SPA’s celebration of St. Patrick and are most proud of their Irish heritage.