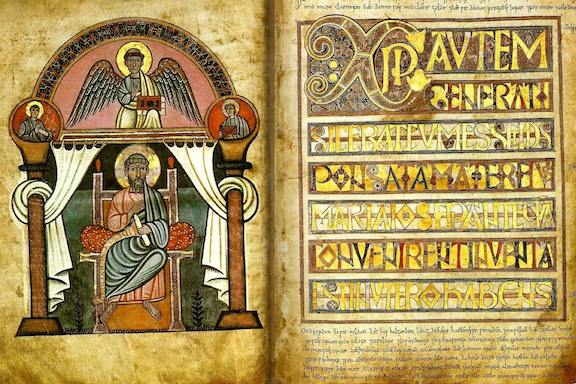 The Book of Kells is back on display at Trinity College.

The world-famous Book of Kells will be back in the Old Library in historic Trinity College, Dublin after it was removed for work on the Library itself. The Book of Kells, a beautifully illuminated ninth-century manuscript that documents the four gospels of the life of Jesus Christ, is Ireland’s greatest cultural treasure.

Painstakingly created by monks, and considered a masterpiece of illustration and calligraphy, it’s probably the world’s most famous medieval manuscript and is recognized by UNESCO as a Memory of the World.
The Book of Kells is the centerpiece of a fascinating exhibition explaining the history of Ireland’s medieval manuscripts and how they were created.

As part of ongoing conservation and preservation plans for the Old Library, the Book of Kells was removed from public display. The conservation work will enable a critical redevelopment of the Old Library, including structural upgrades and digitization of its collection to conserve it for future generations.

The Long Room, where the Book of Kells is displayed, is the longest single-chamber library in the world and is worth a visit on its own merits. This is considered to be one of the world’s most beautiful libraries, housing 200,000 of Ireland’s most ancient texts.

Trinity College dates back to 1592 and a guided tour is an enjoyable way to delve into its fascinating history and the achievements of some of its most famous students, which include literary heavyweights Oscar Wilde, Samuel Beckett and Jonathan Swift.