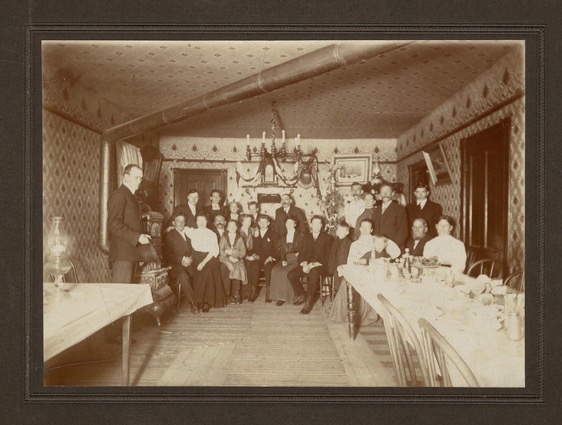 Special to the Irish Gazette

History is written by accountants. The highest praise is too often reserved for those, usually men, who leave the biggest and most public heap of data behind. It takes a bit more searching into what some might consider un-exciting and obscure sources, to discover other contributors and their improvement to history. This is the story that emerged when I looked into the building of the Minnesota State Capitol, and was the result of drilling down into unexciting and obscure sources.

Contrary to popular belief, women contributed significantly to the construction of the Minnesota State Capitol. Like many of the men who provided labor in the construction effort, many of the women who labored there were immigrants from Europe, often Irish, Scandinavians, and Germans. Though their contributions were not directly involved with the hard labor of the construction workers, their supportive domestic labor, factory work and other contributions were important to the overall effort. Unfortunately, the major setback we face in uncovering the history of women workers is that many women were disenfranchised and rendered marginal. However, in spite of this, they wove deeply the very fabric of society, yet left few legible remnants. Tracing their stories is a ghost hunt, so, in order to do justice to their legacies, we must investigate the context in which they lived.

We have some clues to point our search, some lived at home, like teenager Mary Ridge. Others lived elsewhere. The 1905 St. Paul city directory lists many apartments, rooming houses and Grade B residence hotels. Sarah and Sadie Constant, mother and daughter, and Josephine and Jennie Sheeran, also mother and daughter, lived in this kind of housing, which was commonly known as a boarding house.

Both families lived at 58 11th St. in downtown St. Paul. But however, they had more in common than merely living in rooms at the same address.Both families worked at the Minnesota State Capitol during the latter stages of its construction in 1905. The Constants and Sheerans were cleaners and janitors at the Capitol, working part-time. Both mothers, Sarah and Josephine, were widows living with minor children. For single women then, as now, providing for their family was a challenge.

Life in St. Paul around the turn of last century was a difficult struggle, full of sacrifice for low- paid workers to survive. Full- time work was not easy to find, especially for women. In spite of hardship and sacrifice, the Constants and Sheerans were at- tempting to build security and happiness for themselves, constructing the foundations of a successful life in a stable society.

Included in these foundations for success are family, religion, community, and work; the building blocks of a happy life in 20th century America. Family is the glue that holds individuals together. Religion and community organizes and provides the frame- work for family units to interact with others in public space and work provides the means for the other three to flourish. Let us examine the lives of these workers in this context.

Sarah Constant migrated from St. Louis, Mo., immediately prior to a time when the population of St. Paul was growing, faster than most other cities in the country. Constant traveled with her husband, Paul. They were part of a massive immigration wave soon to swell the area, searching for stability in a time of rapid change. Their daughter Sadie was born in 1889 in St. Paul’s in Ward 3, which was near the downtown core.

In the early years, after the turn of the century, Sarah is alone, perhaps divorced, claiming in census records to be a widow, raising two children. Tragedy struck the family in 1902 when Sarah’s young son committed suicide by drinking carbolic acid, a not uncommon way to commit suicide in that period. Sarah herself also appears in a 1902 St. Paul Globe newspaper article, charged with drunkenness after being at a party in the rooms of Peter Duford. According to the article, a fight started, somebody threw a lamp, probably a kerosene or oil lamp, the police were called and eight people were charged with either being disorderly or drunk.

However, in spite of the hardship the Constants may have encountered living in a challenging environment, Sarah and her daughter Sadie continued to be listed as a family for many years, finding the stability necessary to work and leaving a legacy of strength and tenacity in the face of a tough environment. This type of shared legacy was a not uncommon and this type of boarding house life was stable enough for Sarah to raise her children, even after her husband’s death.

During this time, some of the Grade B hotels would send runners, as they were called, down to the train stations, where they would recruit customers. Often, these runners would appeal to the ethnic backgrounds of the arrivals, notably in St. Paul, Irish, Swedish, Norwegian, and German. For example, the Globe Hotel at 58 E. 6th St. to Scandinavian immigrants. Each of these immigrant groups brought their own ideas on how to organize society. Sarah Constant represented the Anglo-American community, colliding with Northern European immigrants and African-Americans, among others. All these communities over- lapped during the construction of the Capitol, exchanging their ideas and perspectives on politics and the proper ordering of society and the Capitol construction represented an appropriate venue for these workers to express ideas on how society works, or should work.