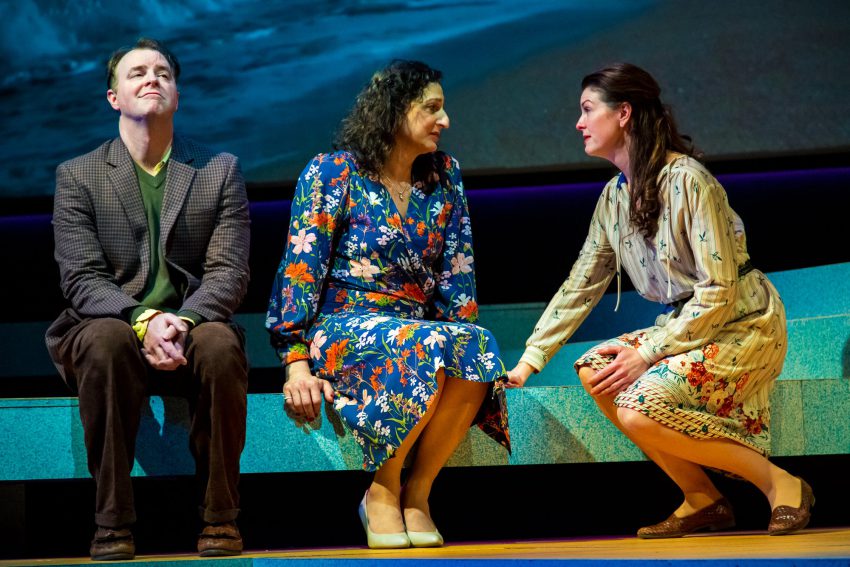 History Theatre recently staged, “Superman Becomes Lois Lane” which follows the trajectory of a local prominent figure, well known in both public service and the private sector. This is the quintessential Saint Paul story as Bob Sylvester (played by Sean Michael Dooley) worked for both church and state, first as managing editor of the Catholic Bulletin and eventually president of the city council.

Sylvester then switched to an investment banking career where his financial efficiency served he and his clients well. A near-death experience on a Montana’s mountain road pushed him into making the decision to become Susan Kimberly and live his life as a woman. As we learn in the play, Sylvester’s penchant for dressing in girl’s clothing was unsupported by his family and ultimately was pushed to the background, however it refused to die.

When he met his future wife Mae, played by Jamie White Jachimiec, he informs her of this fact. This fact becomes the undoing of their marriage relationship when Sylvester announces he is having surgery to conform to the gender he has been cognizant of since early childhood.

In an act of unbelievable sacrifice Mae accompanies Bob to reassignment surgery and sustains Susan in her new identity, still remaining close friends. Mae’s role in the play is an important and truly life-affirming piece of this amazing story.

There are three other characters that play a number of roles in the production but the dynamics between Susan, played by Freya Richman, Bob and Mae, when all are onstage together, are the choicest.

Early on the conversations between Susan and Bob are mystifying until we learn that Susan has been a longtime part of Bob’s life. As Mae says at one point in the play, “Bob and I and Susan were on this journey together.”

Kimberly wrote the play and sharing the perspective of her own journey from man to woman is generous beyond measure. The play is being shown to local high school students and other young audiences to illustrate compassion and support for those confronted with gender issues.

It almost seems like fait acompali when Susan is picked as Mayor Coleman’s deputy mayor since Bob Sylvester’s cherished goal was to become St. Paul’s mayor. In the play, Susan mentions that she is the first transgender woman to hold this post in the nation. The city also got a good deal with that posting.

(Senator Norm Coleman was in the house on opening night as was Mae, who was seated next to Kimberly).

It would have been interesting to have Kimberly spend more time on self-understanding as she holds the unique perspective of being both a man and a woman in this world. However apparently all is well as in her own words “dreams come true.”

The production runs through March 1. More information is available at: historytheatre.com