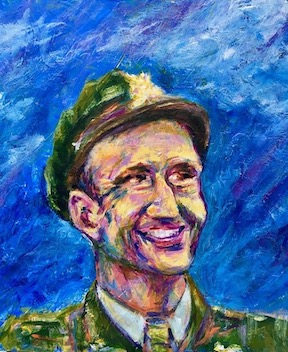 Sometimes a reality check is useful, pointing up on who and what we are and what we stand for. The Western, liberal democratic model is far from perfect, both within and without. Within: there are inequalities of income of treatment and still pockets of remaining discrimination. Without: there are clearly issues with how the countries of the First World Ark interact with the rest of the world , including how our societies responds to hunger, acute poverty and disease, population and migratory pressures and the whole skewed existing global economic relationships. There is much to do and the pressing need for a unified and uniform global approach to the looming existential crisis for all posed by global warming and climate change, leaves very little time to address these problems adequately.

Two Events and one Happening recently brought matters somewhat into focus for me. The first event was the extraordinary and sneering attack on the values of our society mounted by President Putin who condemned Western society and liberal values as “obsolete” and degenerate. It smacked of Cold War rhetoric, which, given Putin’s history as a faithful servant of the criminal conspiracy which ruled and terrorized Russia and her neighbors for seven decades, is hardly surprising. There were the usual knee jerk responses from (most of) the West’s politicians and media, but perhaps the best response is to hold a mirror up to Russia today and query to what values Putin subscribes after almost two decades as ruler.

The second event was the latest G20 Summit which followed closely on Putin’s remarks. Here, gathered in all their glory, were a number of his ideological soulmates who would be likewise dismissive of the West – Xi of China, Bolsonaro of Brazil, Erdogan of Turkey and Bin Salman of Saudi Arabia. Heavy hitters economically and numerically. There were representatives of democratic nations also, including President Trump, who sadly chose to hobnob with Putin and find mirth in the suggestion that Russia had interfered in US elections, and who continues to show preferences for autocrats of the right while slighting the US’ erstwhile allies. It was not his finest moment, yet in a sense the two events did portray a certain grim global reality – that populism, nationalism and anti-democratic sentiments are alive and well and threatening to become ascendant in a way we have not seen for over half a century.

The Happening was altogether different and was one I attended and which took place at the Clay Kaserne Airfield in Wiesbaden Germany on June 10 and 11. It was one of several celebrations to mark the 70th anniversary of the successful Airlift which broke the Soviet blockade of Berlin between June 1948 and May 1949, ( supplies by air continued for several months lest the Soviet lifting of the blockade prove a ruse). Among those present was the last surviving US pilot of the Airlift, ninety eight year old Colonel Gail Halvorsen . The Soviet ground Blockade and the Allied Airlift in response are regarded as the first major confrontation of the Cold War, the Allied success an indication that Western Europe would not be abandoned to Stalin and the Red Army.

The background to the Blockade was how to treat a defeated Germany, partitioned, together with Berlin, into four after 1945. This proved very much a short term and unsatisfactory solution with ideological differences between the victors intensifying and the military boundaries of 1945 gradually hardening as Stalin strengthened his control over those countries occupied by the Red Army. Western Europe was still devastated and it rapidly became clear that any recovery would involve pumping funds into Germany as well as her erstwhile enemies; this in view of Germany’s size, and economic importance within Europe, whatever the crimes of the Nazis. Matters came to a head in the 1947-48 winter, with the commencement of Marshall Aid and plans to merge the three Western zones in Germany and introduce currency reform, even as Communist control was further consolidated by a coup in Czechoslovakia. The extension of the new currency to the Western zones in Berlin (deep within the Soviet sector) prompted Stalin to act, blockading West Berlin by rail, road and canals, but not by air.

The expectation was that West Berlin, with less than six weeks food and coal for its two million people, would succumb quickly. It did not, supplied in a stupendous airlift which consisted of over quarter of a million sorties and which carried at its height almost 13,000 tons of supplies daily, over twice the amount originally envisaged. By its end in 1949, the USAF had delivered 1,783,573 tons and the RAF 541,937 tons, in total 2,326,406 tons, nearly two-thirds coal, on 278,228 flights to Berlin. The C-47s and C-54s involved together flew over 92 million miles in the process. At the height of the Airlift, one plane reached West Berlin every thirty seconds. Wiesbaden airfield has a monument to the 101 fatalities during the Airlift.

Gail Halvorsen occupies a special place in the Airlift’s pantheon. Chatting with Berlin children after a flight, he realized they had no candy or chocolates and told them he would arrange to supply and drop sweets to them during subsequent flights. Which he did, attaching chocolate bars to a makeshift parachute made from a handkerchief. Asked by a little girl how they would recognize his plane he told her he would “wiggle his wings”; again, he did. Halvorsen’s gesture was expanded into an operation known as “Little Vittles” which grew exponentially with both US children and candy manufacturers contributing to an operation that ultimately saw 23 tons of candy dropped for Berlin’s children and Halvorsen earning renown as the “Candy Bomber.”

Gail Halvorsen was back in Wiesbaden last June, well enough to take control of a DC3 which dropped candy for some of today’s German children who were among the 30,000, mainly German, attendance. Later he met up with some of the children (most of whom had lost family in the War) to whom he had dropped candy including one, Mercedes Wild, then a young girl aged seven, who had written to him with directions. It was a special moment as he took the plaudits from those attending.

Consider for a moment what that action and indeed the whole Airlift signified. It was scarcely three years since a devastating war and was to assist a vanquished enemy at a time when emotions and memories were still fresh and raw. There was opposition to helping Berlin. There was, after all, the threat of war. Yet it was done, as part of a process to heal and build reconciliation.That process worked with a peaceful and democratic Germany a cornerstone of the European Union today as testimony to it.

It is easy to be sentimental; so much has happened since. It is easy also to be dismissive, to see the Airlift as just a power play. Yet when we consider what our society stands for, assisting former enemies in need is a positive. And the world knows. Which is why the less fortunate flock and queue for admission to our liberal democratic societies rather than those run by the autocrats and dictators.