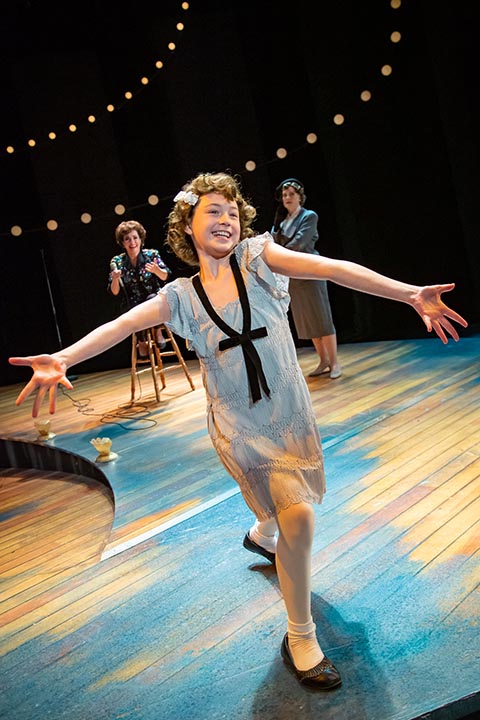 It takes four people to tell the story of a big life like Judy Garlands.  In the newest production from History Theatre, Jody Briskey, as Judy Garland is haunted by her past, which is represented by actors who play Garland at three stages of her life: young Judy (Nicola Wahl), as a teenager (Lillian Carlson) and in adulthood (Elena Glass). The audience learns early on about her parent’s troubled marriage and her dictatorial mother who acted as pharmacist for the young Judy.

Creatively composed to operate on multiple planes at the same time and yet firmly placed in the actual experience of Garland singing at Carnegie Hall in 1961 helps ground the play. This point in time memorializes Garland’s revival as one of the greatest interpretive singers of her time. Her powerful contralto voice was captured that night and the concert went on to win four Grammys and “Album of Year.”

The twists and turns that brought her to this career pinnacle are illustrated by the other iterations of herself and drives home her troubled life. At one point Garland demands that they all get out of her head, however as the play unfolds these images from her past act as cheerleaders and sympathetic motivators.

Although Garland was only 47 when she died, the play covers a lot of ground. The two husbands mentioned (of five) were Vincente Minnelli (Shad Olsen) and Sid Luft (Adam Whisner) the former Liza Minnelli’s father and the latter Lorna and Joey Luft’s father.

Although Jody Briskey has no real similarity in appearance to Judy Garland by the end of the evening the audience was convinced as she sang “Somewhere over the Rainbow” that she was the real deal. Briskey’s phrasing, singing range and body language mirrored Garland’s rather shaky on stage visuals to make her seem like an exact double. The music alone is worth your time as the evening includes, “Get Happy,” “That’s Entertainment,” “The Trolley Song,” along with her signature songs, “Stormy Weather” and “The Man That Got Away” and so much more.

At one point Briskey proclaims, “I am still Judy Garland.” And no one in the house would disagree.

Performances continue through Dec. 22, tickets are available at: historytheatre.com.